From Discovery to Conquest and Colonization

My intention was to write a post a day in August. I've been trying to figure out how to present some complex arguments about political history in the late Middle Ages. I am publishing the work on #POB. This post talks about the plantation model and economic centralization; So I will add the #CENT tag.

In the next few days, I will start a piece called "The Two Sides of the Coin." This article will show that the progressivism and conservatism came from the same. The left/right split was created by agents of the monarchy in reaction to the American Revolution.

The goal of the left/right split is to divide the people so that advocates of centralized control can step in and take power.

It is easy to prove that the left and right came from the same source.

The hard part is to explain the motives and methodology of the split.

I also have a second agenda. I want to show that the US Founders were part of a movement that was building a better approach to governance.

To do this, I want to show that different groups of people in the late Middle Ages had different modes of thought.

The Renaissance began with the rediscovery of the writings of the ancient world. This led to an age of discovery.

One of the most important discoveries is credited to an Italian explorer sponsored by Spanish Monarchs who sought to discover a new route to the East Indies by selling West.

Columbus's act of discovery was quickly followed by acts of conquest and colonization.

To conquer the New World, the Europeans played the game of dividing the tribes in the New World against eachother.

The monarchs pilferred the treasuries of the Aztec and Incas and brought tons of gold and jewels back to the European thrones.

After the conquest, the monarchs used the mass movement of people to colonize and control the new world.

I wish the reader to ignore the race of the slaves for just a moment and think of the slaves as people. The ruling class of Europe was using the mass movement of people to gain power.

The slave trade involved the complicity of many agents. The first European nations to sanction the slave trade were Spain and Portugal.

In 1660 James Stuart, the brother of King Charles II, set up the London based Royal African Company as a royal charter company to organize the slave trade to the English colonies.

The slave trade to the American colonies was established by the brother of the King of England.

I beg you to look at the corporate structure of the Royal Africa Company.

The company received a royal charter and was headed by the brother of the King.

Okay, it is worse than that. When King Charles II died in 1685, James II ascended to the throne.

The slave trade wasn't just established by the brother of the king.

The slave trade was not simply about race. It was about political control.

The slave trade allowed the monarchy to grant large platations to political patrons.

The slave trade provided the means for the monarchy to give patrons vast stretches of land and the forced labor to work the land.

The monarchy is Machiavellian in nature. The European monarchs pitted Native American tribes against each other in brutal wars to gain power. They then use royally chartered companies to impose a centralized economic model on the colonies.

The European people were not keen on slavery. Many of the people in Europe were engaged in an age of discovery as they built new schools built on the liberal arts model.

The Founders of the United States had a liberal arts education and were deeply critical of the direction taken by the monarchy.

I wish to emphasize that there were competing modes of thought that were in play during the founding of the US.

The monarchy was driven by a desire to dominate. They engaged in the practice of dividing and conquering the people. They used the mass movement of people to gain political power.

The people at large were developing a classical liberal view and became critical of the monarchy.

I will end this late night post with the image of the Royal African Company to drive the point that both slavery and the plantation model were created by the ruling class of Europe. 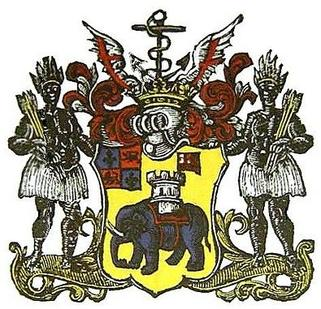